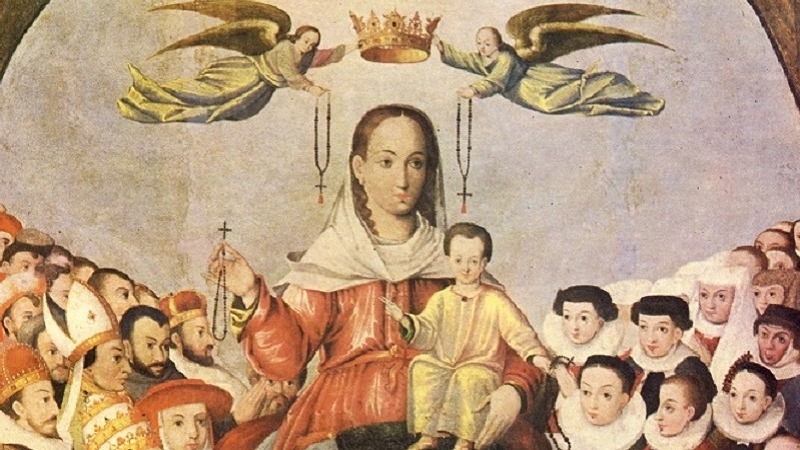 The October intention is in reparation for blasphemies against the Blessed Virgin Mary.

You know the story of David and Goliath.

Goliath the giant, a big, highly trained soldier dressed in his armour and iron helmet, one day challenged any soldier of the Israelite’s army to come and fight against him. All of the Israelites were scared stiff.

It was then that the young shepherd David, without any armour or even a sword, went to reply to the challenge of the Philistine, Goliath. All he had with him was his sling and his shepherd’s staff and five round stones in his pouch.

We know how, with confidence in God’s help, David was victorious. The giant, with one of David’s stones deeply imbedded in his forehead, fell to the ground, and all the Philistines fled terror-stricken. All acknowledged that God had manifested his Power by using that which seemed weak in the eyes of the world to overthrow that which seemed so strong.

Today as well, there are those who seem strong, wise and powerful in the eyes of the world:

But today, there is as well those who, in the eyes of the world, are little and weak.

Today there are you, the Crusaders of the Eucharist.

It was to children like yourselves at Pontmain, at la Salette, at Lourdes, and at Fatima that the Blessed Virgin Mary appeared to bring a salutary message to the world.

It was on children like yourselves that the Popes Saint Pius X and Benedict XV wanted the hope of a Christianity in danger, to depend. God wants to triumph over the enemies of our day by the communions prayers and sacrifices of the children, just as he did of old through David and his sling.

It is especially during this month of October dedicated to the Holy Rosary that we will take up the little stones (beads) of our rosary to fight against the devil, the flesh and the world. Pray dear children to bring back again the Catholic Faith to our country, and help the world to submit to the sweet Reign of Jesus and Mary.

It is God who will it.