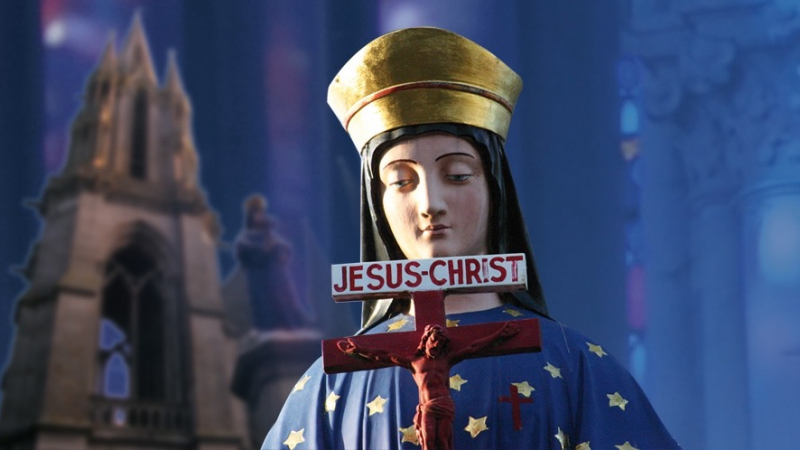 The February intention is to thank God for the vocations received and to pray for their fidelity.

150 years ago today, France had been at war for several months against Prussia, and in January 1871 the French armies were defeated. God punished France which, even though it gave many missionary vocations, continued to propagate the ideas of the French revolution.

On January 17, 1871, in Saint-Brieuc, Brittany, the parishioners of the Basilica of Our Lady of Hope, on the order of the bishop, vowed to offer Our Lady a banner, if they obtained her help and protection against the scourges that threatened them.

On the same day, while the Prussians were a day's walk from the small village of Pontmain, located in Mayenne, 150 km from Saint-Brieuc, at about 6 pm, the Holy Virgin Mary appeared for three hours to some children who were beating rushes to feed the animals in their father's barn.

The beautiful Lady was dressed in a blue dress with stars and held a bloody crucifix in her hand. Before long, on a banner at the Lady's feet, letters appeared: "Do but pray my children, God will answer you in a short time, my Son lets Himself be afflicted.

The very next day the Prussian armies retreated, and a week later, it was the end of the war. All the young soldiers of Pontmain returned safe and sound to the village. This was the power of the children's prayer.

Since then, the Crusaders have offered a beautiful altar to Our Lady in the basilica built in Her honour in Pontmain.

So today, 17th January 2021, is the one hundred and fiftieth anniversary of this apparition. In these times so troubled in the world and in the Holy Church, Notre-Dame de Pontmain wishes to send the same message to you too, dear Crusaders:

1) Do but pray my children! At the school in Pontmain, the children's teacher, Sister Vitaline, often said to them: Do but study! Just like study, prayer is therefore necessary.

2) God will answer you in a short time. The parish priest of Pontmain often invited his parishioners to pray, but many were discouraged and said: "We pray, but God does not answer us. It's all over, the Prussians are coming. So Our Lady reminded them of the effectiveness of prayer.

3) Finally, Our Lady wants to give us back our confidence. She reminds us that we are not the only ones to pray to God, but She herself prays for us to her Son. She joins her prayers to ours, and says to us, My Son lets Himself be afflicted.

Notre-Dame de Pontmain is the Queen of the Eucharistic Crusade in France, but She loves all the Crusaders of the world. May She bless and protect all of you on this anniversary and make you saints!