Christmas - The Fountains of the Saviour 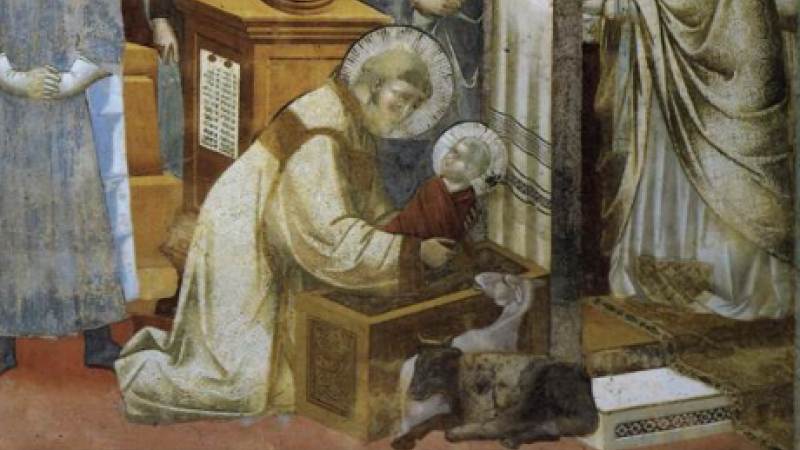 A sermon of St. Bernard for the Christmas.

The solemnity of Our Lord’s Nativity is indeed a great and glorious day, but a short one, and a short day calls for a short sermon.

No wonder if we make a short speech, since God the Father has made an abbreviated Word – Verbum abbreviatum. Would you know how long and how short is the Word He has made? This Word says, “I fill heaven and earth,” (Jer. 23:24) yet, now that “the Word is made flesh,” He is placed in a narrow manger. The Psalmist exclaimed, “From eternity and to eternity thou art God,” (Ps. 89:2) yet, behold! He is a Child of a day. And why this? What necessity was there that the Lord of Majesty should so annihilate Himself, should thus humble Himself, thus abbreviate Himself, except to show that we should do in like manner? He now proclaims by example what He will one day preach in words – “Learn of Me, for I am meek and humble of heart” – and He does so that the Evangelist might be proved truthful when he said of this Word, “Jesus began to do and to teach.”

I therefore earnestly beseech you not to allow so precious an example to be set before you in vain. Conform yourselves to it, and be ye renewed in the spirit of your mind. Aim at humility; it is the foundation and the guardian of all virtues. Follow after it, for it alone can save your souls. What is more deplorable, what more hateful, what more grievously punishable than that, after seeing the God of heaven become a Little One, man should any longer endeavour to glorify himself upon earth? It is an intolerable insolence that when Majesty has annihilated itself, a worm of the earth should inflate and puff itself up. It was to make reparation for this pride that He Who, in the form of God, was equal to the Father, “emptied himself, taking the form of a servant.” (Phil. 2:7). He emptied Himself – yes, of His majesty and His power, not of His mercy and His goodness, for the Apostle tells us “the goodness and kindness of our Saviour hath appeared.” (Titus 3:4). His power had appeared in the creation of the world, His wisdom has ever been manifested in its government, but now in His humanity His goodness and mercy are more specially made known. He had shown His power to the Jews in signs and prodigies; therefore you will often find in the writings of the Old Law such expressions as “I am the Lord,” “I am God.” To the ancient philosophers, abounding in their own sense, he likewise made His majesty known, according to those words of the Apostle, “That which is known of God is manifest in them, for God hath manifested it to them” (Rom. 1:19). The Jews were subdued by this same power; the philosophers, searchers into majesty, were overwhelmed by His glory. Power exacts subjection, majesty inspires awe, but neither oblige to imitation. Let thy goodness, O Lord, now appear, that man, who is created in Thy likeness, may be conformed to it; for power, majesty, and wisdom are not what we can imitate, or what it is expedient that we should copy. In the case of the angels Thy mercy was withheld from a portion only of them; afterwards the whole human race was overwhelmed by Thy judgment.

Let mercy extend her dominion, let her reach from end to end mightily, and dispose all things sweetly. In the past, O Lord, Thou didst limit Thy mercy by judgment; come, we beseech Thee, now flowing with compassion and overflowing with charity. What does thou fear, O man? Why dost thou tremble before the face of the Lord “because He cometh”? It is not to judge the earth that He comes, but to save it. Fly not, O man, fear not; Jesus comes not in anger, He comes not to punish: He comes to seek thy salvation. And lest thou shouldst say even now, “I heard thy voice, and I hid myself,” (Gen. 3:10). Behold, He comes as an Infant, and without speech, for the voice of the wailing infant arouses compassion, not terror. If He is terrible to any, yet not to thee. He is become a Little One, His Virgin Mother swathes His tender limbs with bands, and dost thou still tremble with fear? By this weakness thou mayest know that He comes not to destroy, but to save; not to bind, but to unbind. If He shall take up the sword, it will be against thine enemies, and, as the Power and the Wisdom of God, He will trample on the necks of the proud and the mighty.

We have two enemies, sin and death – that is, the death of the soul and death of the body. Jesus comes to conquer both, and to save us from both. Already He has vanquished sin in His own person by assuming a human nature free from the corruption of sin. For great violence was offered to sin, and it knew itself to be indeed subdued, when that nature which it gloried to have wholly infected and possessed was found in Christ perfectly free from its dominion. Henceforth Christ will pursue our enemies, and will seize them, and will not desist until they are overcome in us. His whole mortal life was a war against sin. He fought against it by word and example. But it was in His passion that He came upon the strong man armed, and bound him, and bore away his spoils. (St. Luke 11:22).

Jesus Christ also conquers our second enemy, death. He overcomes it first in Himself, when He rises from the dead, the first-fruits of them that sleep, and the first-born from the dead. Afterwards He will, in like manner, vanquish death in all of us when He shall raise our mortal bodies from the dust, and destroy this our last enemy. Thus, when He rose from the dead, Jesus was clothed in beauty, not wrapped in swaddling-clothes as at His birth. He that previously overflowed with mercy, “judging no man,” girded Himself in His resurrection with the girdle of justice, and in so doing seemed in some degree to restrain His superabundant mercy in order to be thenceforth prepared for the judgment which is to follow our future resurrection.

But, Christ comes now, in His Nativity, as a Little One, with the prerogative of mercy, that His mercy, going before, may temper the justice of our future judgment. Although He comes as a Little One, the gifts He brings are not little, the treasures He bestows are not little. In the first place, He brings mercy, for the Apostle testifies: “According to his mercy he hath saved us.” (Titus 3:5). Neither was it only to those among whom He lived that he brought these benefits. Christ Our Lord is a fountain that can never be exhausted. He is a fountain for us, too, wherein we may be washed from sin; as it is written, “who hath loved us, and washed us from our sins.” (Apoc. i. 5) But water not only washes away our stains, it likewise quenches our thirst. This is the second use of the fountain, and the Wise Man says: “Justice shall give him the wholesome water of wisdom to drink.” (Ecclus. 15:3).

The third use of water is for irrigation. This is specially needed by young plantations and seeds newly sown, lest they be either stunted in growth, or wither away through want of moisture. Let, then, everyone who wishes to sow the seed of good works seek the water of devotion, that, being fertilised by the fountain of grace, the source of a good life, he may not wither away, but make progress in continual freshness of spirit.

Let us now see if we can find a fourth fountain, and win back our paradise, to be beautified, like that of old, by the water from four fountains or springs. Because if we do not desire to have the earthly paradise restored to us, how shall we hope for the kingdom of heaven? “If I have spoken to you earthly things, and you believe not, how will you believe if I shall speak to you heavenly things?” (John 3:12). In order, therefore, that by the manifestation of things present the expectation of the future may be made sure, we have a paradise far better and more delightful than that of our first parents. Our paradise is Christ Our Lord. In this paradise, we have already found three fountains; the fourth is yet to be sought. We have the fountain of mercy for washing away the stains of our sins; we have the fountain of wisdom, giving the waters of discretion for allaying our spiritual thirst; and we have the fountain of grace and devotion for irrigating the plants of our good works. The fourth fountain seems to be the fervid waters of charity. Hence the Prophet exclaims: “My heart grew hot within me, and in my meditation a fire broke forth.” (Ps. 38:4.). And elsewhere: “The zeal of thy house hath eaten me up.” (Ps. 68:10.). So that the just man loves justice from the sweetness of devotion, and hates iniquity from the fervour of zeal. Was it not of these four fountains that Isaias spoke: “You shall draw waters with joy from the Saviour’s fountains”? (Isa. 12:3.). And that we may know this promise to be spoken of the present life, not of that to come, mark what follows: “In that day, praise ye the Lord, and call upon his name.” Invocation belongs to the present time, as it is written: “Thou didst call upon me in the day of tribulation, and I heard thee.” (Ps. 80:8.).

Of these four fountains, three seem to apply specially to each of the three chief needs of the faithful. The first – remission – is common to all, for we all “offend in many things,” (James 3:2.) and we have need of the fountain of mercy for washing away the stains of our sins. “We have all sinned, and do need the glory of God,” (Rom. 3:23.) whether prelates, virgins, or married people.

All Christians likewise, both the penitent and the devout, must have recourse to the second fountain, that of wisdom, for all walk in the midst of snares, and require its guidance to enable them to decline from evil and do good.

All, again, must hasten to the fountain of grace and devotion, that they may receive the unction necessary for fructifying their works and labours of penance and abstinence, and to enable them to act always in a spirit of cheerfulness, for “God loveth the cheerful giver.” This grace we ask in the Lord’s Prayer under the name of our daily bread.

In all these points nothing else seems to be meant but that our good works are to be seasoned with the fervour of devotion and the spiritual sweetness of grace.

The fourth fountain of zeal seems more specially suited to those in authority.

These four fountains our Blessed Lord offers to us in His own person while we still live on earth. A fifth, which is the fountain of life, He promises to give us in the world to  come. This is the water for which the holy Prophet thirsted: “My soul hath thirsted after the strong living God.” (Ps. 41:3.).

But see how, after treating of the mysteries of Our Lord’s Nativity, we have suddenly turned to the mystery of His Passion. Yet it is no wonder that we should seek in the Passion for the treasures that Christ brought us in His Nativity, since it was in His Passion that He poured out for us the price of our redemption.