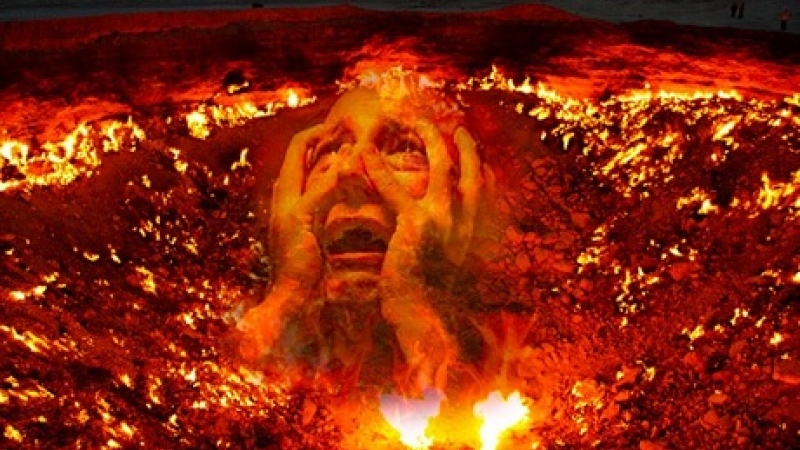 “But the children of the kingdom shall be cast out into the exterior darkness; there shall be weeping and gnashing of teeth.” – Matt. 8:12

In the Gospel of this day it is related that, when Jesus Christ entered into Capharnaum, there came to Him a centurion beseeching Him to cure his servant, who lay sick of the palsy. Jesus answered: “I will come and heal him.” “No,” replied the centurion, “I am not worthy that Thou shouldst enter under my roof; but only say the word, and my servant shall be healed.” Seeing the centurion’s faith, the Redeemer instantly consoled him by restoring health to his servant; and, turning to His disciples, He said; “Many shall come from the east and the west, and shall sit down with Abraham and Isaac and Jacob in the kingdom of heaven. But the children of the kingdom shall be cast out into the exterior darkness; there shall be weeping and gnashing of teeth.” By these words Our Lord wished to signify, that many persons born in infidelity shall be saved, and enjoy the society of the saints, and that many who are born in the bosom of the Church shall be cast into hell, where the worm of conscience, by its gnawing, shall make them weep bitterly for all eternity.

A damned person once appeared to St Hubert and said that two remorses were his most cruel executioners in hell: the thought of the little which was necessary for him to have done in this life to secure his salvation; and the thought of the trifles for which he brought himself to eternal misery. The same thing has been said by St Thomas. Speaking of the reprobate, he says: “They shall be in sorrow principally because they are damned for nothing, and because they could most easily have obtained eternal life.”

Let us stop to consider this first source of remorse; that is, how few and transitory are the pleasures for which all the damned are lost. Each of the reprobate will say for eternity: If I abstained from such a gratification; if in certain circumstances I overcame human respect; if I avoided such an occasion of sin – such a companion, I should not now be damned; if I had frequented some pious sodality; if I had gone to confession every week; if in temptations I had recommended myself to God, I would not have relapsed into sin. I have so often proposed to do these things, but I have not done them. I began to practice these means of salvation, but afterwards gave them up; and thus I am lost.

This torment of the damned will be increased by the remembrance of the good example given them by some young companions who led a chaste and pious life even in the midst of the world. It will be still more increased by the recollection of all the gifts that the Lord had bestowed upon them, that by their co-operation they might acquire eternal salvation; the gifts of nature – health, riches, respectability of family, talents; all gifts granted by God, not to be employed in the indulgence of pleasures and in the gratification of vanity, but in the sanctification of their souls, and in becoming saints. So many gifts of grace, so many divine lights, holy inspirations, loving calls, and so many years of life to repair past disorders. But they shall forever hear from the angel of the Lord that for them the time of salvation is past. “The angel whom I saw standing, swore by Him that liveth forever and ever, … that time shall be no longer.”

Alas! What cruel swords shall all these blessings received from God be to the heart of a poor damned Christian, when he shall see himself shut up in the prison of hell, and that there is no more time to repair his eternal ruin! In despair he will say to his wretched companions: “The harvest is past; the summer is ended; and we are not saved.” The time, he will say, of gathering fruits of eternal life is past; the summer, during which we could have saved our souls, is over, but we are not saved: the winter is come; but it is an eternal winter, in which we must live in misery and despair as long as God shall be God.

O fool, he will say, that I have been! If I had suffered for God the pains to which I have submitted for the indulgence of my passions – if the labours which I have endured for my own damnation had been borne for my salvation, how happy should I now be! And what now remains of all past pleasures, but remorse and pain, which now torture, and shall torture me for eternity? Finally, he will say, I might be forever happy, and now I must be forever miserable. Ah! this thought will torture the damned more than the fire and all the other torments of hell.

Saul forbade the people, under pain of death, to taste food. His son Johnathan, who was then young, being hungry, tasted a little honey. Having discovered that Jonathan had violated the command, the king declared that he should die. Seeing himself condemned to death, Jonathan said with tears: “I did but taste a little honey… and behold I must die.” But the people, moved to pity for Jonathan, interposed with his father, and delivered him from death. For the unhappy damned there is no compassion, there is no one to intercede with God to deliver them from the eternal death of hell. On the contrary, all rejoice at the just punishment which they suffer for having wilfully lost God and paradise for the sake of a transitory pleasure.

After having eaten the pottage of lentils for which he sold his right of primogeniture, Esau was tortured with grief and remorse for what he had lost, and “roared out with a great cry.” Oh, how great shall be the roaring and howling of the damned, at the thought of having lost, for a few poisonous and momentary pleasures, the everlasting kingdom of paradise, and of being condemned for eternity to a continual death!

The unfortunate reprobate shall be continually employed in reflecting on the unhappy cause of their damnation. To us who live on earth our past life appears but in a moment – but a dream. Alas! What will the fifty or sixty years which they may have spent in this world appear to the damned, when they shall find themselves in the abyss of eternity, and when they shall have passed a hundred and a thousand millions of years in torments, and shall see that their miserable eternity is only beginning, and shall be forever in its commencement? But have the fifty years spent on this earth been full of pleasures? Perhaps the sinner, living at enmity with God, enjoyed uninterrupted happiness in his sins? How long do the pleasures of sin last? Only for a few minutes; the remaining part of the lives of those who live at a distance from God is full of anguish and pain. Oh! What will these moments of pleasure appear to a damned soul when he shall find himself in a pit of fire?

“What hath pride profited us? Or what advantage hath the boasting of riches brought us? All those things have passed away like a shadow.” Unhappy me! Each of the damned shall say, I have lived on earth according to my corrupt inclinations; I have indulged my pleasures; but what have they profited me? They have lasted but for a short time; they have made me lead a life of bitterness and disquietude; and now I must burn in this furnace forever, in despair, and abandoned by all.

A certain queen, blinded by the ambition of being a sovereign, said one day: “If the Lord gives me a reign of forty years, I shall renounce paradise.” The unhappy queen reigned for forty years; but now that she is in another world, she cannot but be grieved at having made such a renunciation. Oh, how great must be her anguish at the thought of having lost the kingdom of paradise for the sake of a reign of forty years, full of troubles, of crosses, and of fears! To the damned says St Peter Chrysologus the voluntary loss of Paradise is a greater loss than the very pains of hell.

The greatest pain in hell is the loss of God, that sovereign good, who is the source of all the joys of paradise. “Let torments,” says St Bruno, “be added to torments, and let them not be deprived of God.” The damned would be content to have a thousand hells added to the hell which they suffer, provided they were not deprived of God; but their hell shall consist in seeing themselves deprived forever of God through their own fault. St Teresa used to say, that when a person loses, through his own fault, a trifle – a small sum of money, or a ring of little value – the thought of having lost it through his own neglect afflicts him and disturbs his peace. What then must be the anguish of the damned in reflecting that they have lost God, a good of infinite value, and have lost Him through their own fault?

The damned shall see that God wished them to be saved, and had given them the choice of eternal life or of eternal death. “Before man is life and death,… that which he shall choose shall be given to him.” They shall see that, if they wished, they might have acquired eternal happiness, and that, by their own choice, they are damned. On the day of judgement they shall see many of their companions among the elect; but, because they would not put a stop to their career of sin, they have gone to end it in hell. “Therefore we have erred,” they shall say to their unhappy associates in hell; we have erred in losing heaven and God through our own fault, and our error is irreparable. They shall continually exclaim: “There is no peace for my bones because of my sins.” The thought of having been the cause of their own damnation produces an internal pain, which enters into the very bones of the damned, and prevents them from ever enjoying a moment’s repose. Hence, each of them shall be to himself an object of the greatest horror. Each shall suffer the pain threatened by the Lord: “I will set thee before thy face.”

If, beloved brethren, you have hitherto been so foolish as to lose God for a miserable pleasure, do not persevere in your folly. Endeavour, now that you have it in your power, to repair your past error. Tremble! Perhaps, if you do not now resolve to change your life, you shall be abandoned by God and be lost forever. When the devil tempts you, remember hell – the thought of hell will preserve you from that land of misery. I say, remember hell and have recourse to Jesus Christ and to most Holy Mary, and they will deliver you from sin, which is the gate of hell.