The Traditional Mass vs. the New Mass

A criticism of the "New Rite" cannot be a criticism of the Mass in itself, for this is the very sacrifice of Our Lord bequeathed to His Church, but it is an examination, whether it is a fit rite for embodying and enacting this august Sacrifice.

It is difficult for those who have known nothing other than the New Mass to understand of what they have been deprived, and attending a "Latin Mass" often just seems alien. to see clearly what it is all about, it is necessary to have a clear understanding of what the Church teaches about the Mass. Only in the light of these can the "new rite" of Mass be evaluated.

"The Novus Ordo Missae, considering the new elements widely susceptible to widely different interpretations which are implied or taken for granted, represents, both as a whole and in its details, a striking departure from the Catholic theology of the Mass as it was formulated in Session 22 of the Council of Trent. The 'canons' of the rite definitively fixed at that time erected an insurmountable barrier against any heresy which might attack the integrity of the Mystery." (Cardinals Ottaviani and Bacci, The Ottaviani Intervention)

"The pastoral reasons put forth to justify such a grave break, even if such reason could still hold good in the face of doctrinal considerations, do not seem sufficient. The innovations in the Novus Ordo and the fact that all that is of perennial value finds only a minor place, if it subsists at all, could well turn into a certainty the suspicion, already prevalent, alas, in many circles, that truths which have always been believed by the Christain people can be changed or ignored without infidelity to that sacred deposit of doctrine to which the Catholic faith is bound forever. The recent reforms have amply demonstrated that new changes in the liturgy could not be made without leading to complete bewilderment on the part of the faithful, who already show signs of restiveness and an indubitable lessening of their faith. Among the best of the clergy, the result is an agonizing crisis of conscience, numberless instances of which come to us daily." (Cardinals Ottaviani and Bacci, The Ottaviani Intervention)

What is the New Mass?

Some of the elements that make up the New Mass are Catholic: a priest, bread and wine, genuflections, signs of the Cross, etc. But some are also Protestant: a table, common-place utensils, communion under both kinds and in the hand, etc. The New Mass mixes these heterodox elements alongside the Catholic ones to form a liturgy which would marry the Church and the wolrd, Catholicism and Protestantism, light and darkness. Indeed, the Novus Ordo Missae presents itself as:

There are also a great deal of rubrical changes: the celebrant facing the people from where the tabernacle was formerly kept, just after the consecration all acclaim He "will come again," sacred vessels are no longer gilt and the Sacred Particles are ignored. The priest no longer joins thumb and forefinger after the consecration, the vessesl are not purified as they used to be, Communion is most frequently given in the hand, and genuflections on the part of the priest and kneeling on the part of the faithful are much reduced. The people also take over much of what the priest formerly did.

Judgment on the Novus Ordo Missae

"The Novus Ordo Missae, even when said with piety and respect for the liturgical rules, ...is impregnated with the spirit of Protestantism. It bears within it a poison harmful to the Faith." (Archbishop Lefebvre, An Open Letter to Confused Catholics)

The dissimulation of Catholic elements and the pandering to Protestants which are evident in the Novus Ordo Missae render it a danger to our faith given that it lacks the good which the sacred rite of Mass ought to have.

By their fruits you shall know them: We were promised the Novus Ordo Missae would renew Catholic fervor, inspire the young, draw back the lapsed and attract non-Catholics. Who today can pretend that these things are its fruits? Together with the Novus Ordo Missae did there not instead come a dramatic decline in Mass attendance and vocations, an "identity crisis" among priests, a slowing in the rate of conversions, and an accleration of apostasies? So, from the point of view of its fruits, the Novus Ordo Missae is not a rite conducive to the flourishing of the Church's mission.

Does it follow from the apparent promulgation by the Popes that the Novus Ordo Missae is truly Catholic? No, for the indefectibility of the Church does not prevent the Pope personally from promoting defective and modernist rites in the Latin rite of the Church. Let us remember that a pope engages his infallibility not only when teaching on faith or morals (or legislating on what is necessarily connected with them) but when so doing with full pontifical authority and definitively (cf. Vatican I [Denzinger, Enchiridion Symbolorum, 1839]).

Who made up the Novus Ordo Missae?

It is the invention of a liturgical commission, the Consilium whose guiding light was Fr. Annibale Bugnini (made an archbishop in 1972 for his services), and which also included six Protestant experts. Fr. Bugnini (principal author of Vatican II's Sacrosanctum Concilium) had his own ideas on popular involvement in the liturgy (A. Bugnini, La Riforma Liturgia, Centro Liturgico Vincenziano, 1983), while the Protestant advisors had their own heretical ideas on the essence of the Mass.

But the one on whose authority the Novus Ordo Missae was enforced was Pope Paul VI, who "promulgated" it by his Apostolic Constitution, Missale Romanum (April 3, 1969). 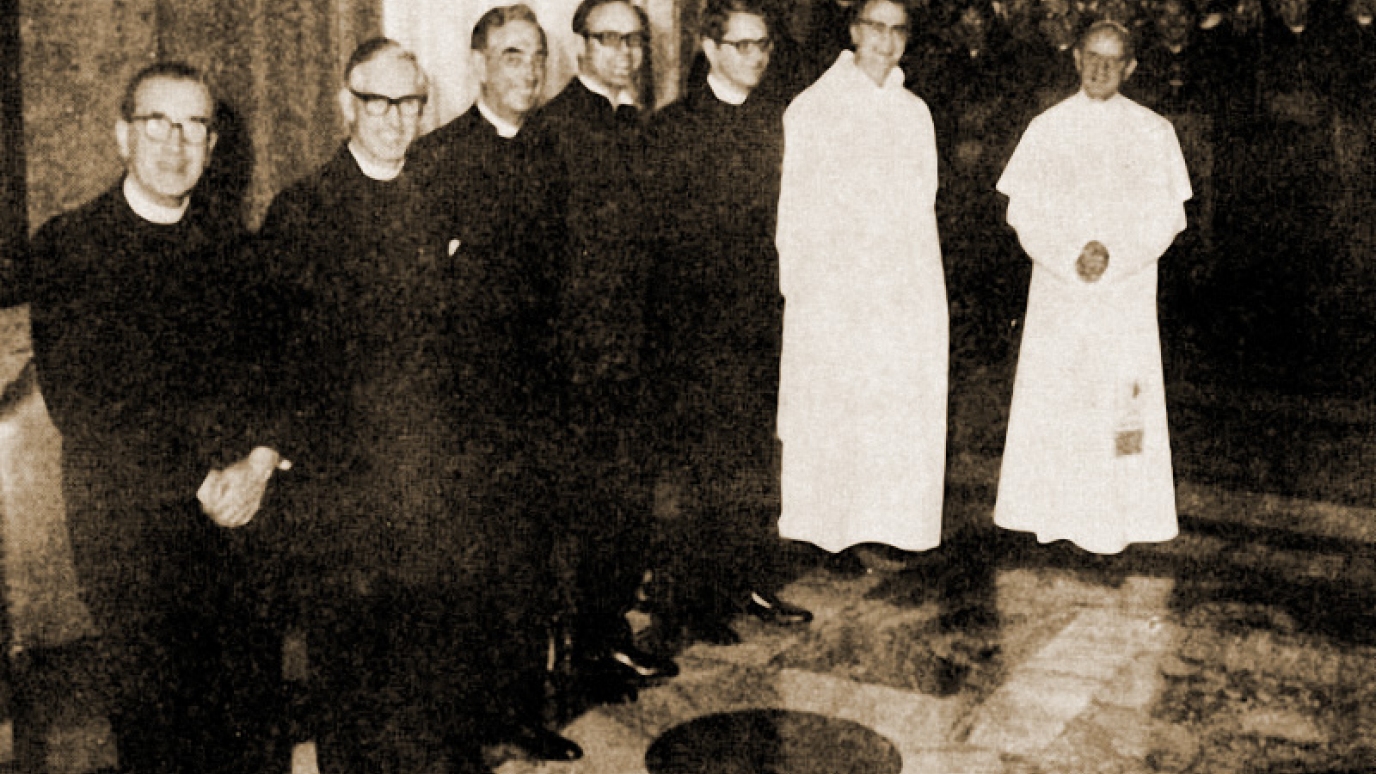 For further study of the New Mass, please consult these articles:

Is the New Mass legit?

With regard to the New Mass

New Rite Condemned by the Tradition of the Church

What is the Novus Ordo Missae

Should Catholics attend the New Mass

For further study of the Traditional Mass, please consult these articles:

The Holy Sacrifice of the Mass

The Propagation of the Faith and the Mass of All Times

The Tridentine Mass in pictures

Mass of All Time

62 reasons why in conscience we cannot attend the New Mass

The Ottaviani Intervention: A Brief Critical Study of the New Order of Mass.